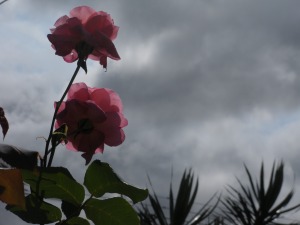 Roses on a cloudy day

January is the month of resolutions and new leafs to turn over for most people.  But for me, January is the month that I celebrate surviving cancer.  I am a cancer surviver.  I discovered that I had thyroid cancer in 2009.  Though in my everyday life I don’t define myself by this, it actually effects me every single day.  Nobody thinks much about their thyroid until it goes bad, but if you can still eat carbs without having them turn to fat the minute they touch your lips then you should drop to your knees and thank God for your healthy thyroid!

It all started in 2006 when I got pregnant with our third child.  We were living in Costa Rica at the time, studying Spanish and preparing to move to Mexico.  It was an uneventful pregnancy and we moved to Mexico without much concern about giving birth overseas.  After all, this was my third child and I was a pro at this, right?  Lulu was born on May 1st which is Labor Day in Mexico.  (I tried to explain the pun that I was in labor on Labor Day, but it just didn’t translate.  My friends just smiled tolerantly.)  Naturally, in the first few weeks of adjusting to a new baby and nursing round the clock, I was tired!  Then to compound the facts we started noticing that Lulu was having some health issues.

Lulu rarely slept more than a half an hour at a time.  When I started focusing on why she was waking up so often, I noticed that she would stop breathing and then suddenly gasp for air and wake up.  “Well that’s not normal!”  I thought.  The next year and a half were filled with doctors’ appointments, visits to specialists, sleep studies, experimental foods, poking and prodding of the baby, and hours spent on the internet searching for answers.  In the mean time, she continued to micro-sleep and gasp for air… and I didn’t sleep at all.

I kept Lulu in bed with me and dozed with my hand on her tummy feeling her breathe.  A few times I woke up and suddenly realized that she was not breathing and starting to turn grey!  We even got into CPR position 2 or 3 times when normal rubbing and pinching didn’t wake her up- then suddenly she would gasp and breathe again though she was lethargic after each of these episodes.  So I wasn’t sleeping and I was feeling worse and worse as the weeks went by.

Shortly after her first birthday we decided to contact the Children’s Hospital in St. Paul, Minnesota.  They scheduled an appointment with a child sleep apnea specialist for NOVEMBER!  I thought, “Didn’t you hear me say that my baby quits breathing at night?  I don’t know if she will still be ALIVE in November!!  How does this not constitute a crisis?”  So all fall we kept working with specialists in Mexico while we waited for our November appointment.  And I still wasn’t sleeping.

I knew something was wrong with me shortly after giving birth, I just wasn’t bouncing back from this pregnancy.  I told my husband, “I think I’m low on some hormones or something.  After I’m done nursing I’m going to go to the doctor and have my hormones checked.”  I was tired all the time- but I was a new mom with a baby that wasn’t sleeping well, so that was explained.  My hair was falling out by the handful- but that happens after pregnancy sometimes.  I was cold all the time- and that one I couldn’t explain away.  I lived in Mexico!  Even when it was 90 degrees out I was sitting outside in the sun wearing a polar fleece just to keep warm!  That was odd.  So I tried exercising more to get my circulation going and to lose the baby weight, but I just got more and more exhausted and the weight continued to go up.  I had no energy.  I remember sitting on the couch holding my lethargic baby watching hours of children’s programs, neither one of us had the energy or desire to play.   She just cuddled with me and sucked her fingers.  The dark circles under both our eyes grew deeper and deeper.

Waiting all fall for our appointment at Children’s was terribly stressful.  I was on the verge of tears every day and I was barely holding it together.  You know that feeling you get in your throat when you are holding back the tears… the lump in your throat?  Yeah, that’s what I felt like for several months.  I had a lump in my throat.  I thought it was the stress getting to me.  When we arrived at the Children’s Hospital the sleep specialist took one look at Lulu and admitted her immediately.  Finally, someone was taking this seriously!  I remember a conversation I had with her doctor.  He said, “How can I help YOU through all this?”  I paused and told him, “I’m tired of trying to be the doctor.  We have all these symptoms and I don’t know what they mean.  It’s like having a handful of dots and not knowing how to connect them.  I’m at the end of my knowledge and the end of my strength.  I would like you to be the Doctor and I’ll be the Mommy.  How about that?”  He smiled and said, “That’s what I do best.”  I started to relax for the first time in months.

We moved back to Minnesota in December and continued Lulu’s treatments, she was already starting to improve on her new diet and medicine!  In January we began our standard rounds of physical exams for the whole family which are required by our missions agency.  Then the other shoe dropped.  During my routine physical exam the doctor found the lump in my throat.  “That’s not normal!” she said, and sent me to radiology for the first of a million tests. I wasn’t too worried yet, probably a vocal nodule or maybe a cyst.  In April, the doctor said the word “Cancer” to me.

They operated to remove my thyroid and found a second form of cancer in there.  Radiation was mandatory at that point.  Weeks passed with me laying weakly on the couch with a more energetic Lulu bouncing around the living room.  I watched the movie Wall-E with her every morning… well, more accurately, I fell asleep watching Wall-E every morning.  The lilacs were in bloom the week of my isolation for radiation treatment.  I missed them so badly.  After the radiation I lost my senses of smell and taste for almost 2 months!  I filled my house with lilacs even though I couldn’t smell them.  I ate almost nothing and still the weight crept up.  “Be patient” everyone said, “It takes time for them to get your medicine to the right level.” (Now it’s been 2 years and they are still tinkering with my levels.)

Slowly, slowly life returned to normal and I felt like I was slowly rising from the dead.  I was unthawing.  Waking up from a bad dream.  I still struggle with fatigue and my weight will always be an issue.  I think about all the stuff I could accomplish if I didn’t have to fight through this brain-fog every day.  But every night I take my pills and I think about how my thyroid tried to kill me.  It might not be the last time I hear the word “Cancer” from a doctor, but every January I can celebrate having a clean cancer screening and normal tumor markers in my blood work.  Every January I start a new year with my precious family and rather than looking back, I look forward.