We were missionaries in Mexico City for two years.  I did not love living in Mexico City.  There, I said it.  Up until this moment only some close friends and family had ever heard me say that.  Mexico City is a hard city to live in.  Aside from the language (which we were still learning), the traffic, and the pollution- living in a place where the bad guys had police badges and guns really messed with me in ways I’m not sure I can fully explain.  Corruption is a bad, bad thing. 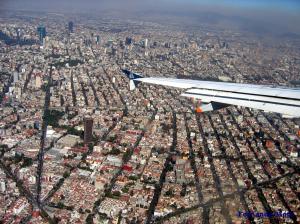 On a spiritual level, the oppression over that city is palpable.  You can feel it even if you aren’t paying attention.  Let me describe it.  When I was flying with our kids into Mexico City from language school (Josh was already there with the car and trailer) I felt this spiritual oppression for the first time- but I had no words for it yet.  About 20 minutes from landing at the airport I was busy getting my kids packed up and resettled for landing.  Suddenly a fear gripped my heart.  I broke into a cold sweat and I felt the tears welling up in my eyes.  “I can’t do this,” I thought.  “What the heck am I doing bringing my kids to this city?!  I can’t do this.”  The voice of the Enemy spoke in my heart.  I felt sick to my stomach.

What I didn’t know was that I was flying into the spiritual domain of Death.  Since the beginning of human history in this valley, Death has been worshipped.  Humans have been sacrificed.  Even up to this modern day and age, Satanism is alive and well in Mexico.  There is even a holiday celebrating Death here.  Because Death is still worshipped here it has the right to be here.  Death does not like the messengers of God coming here because we bring Life.  Death hates that.  So Death did not want me and my family coming to Mexico City.  Death tried to intimidate me.  Everyday.

We knew beyond a shadow of a doubt that we were in God’s will coming to Mexico City.  Doors had opened, miracles had happened, God’s blessing was on us and ministry was good!  So we felt certain that we were in God’s will.  But living there under the oppression of Death, day in and day out, was a grind.  It wore us to the bone.  But we are not quitters.  We had always said that we would never leave just because it was hard, or we were uncomfortable, or we didn’t absolutely love it here.  We only left when Lucy and I got sick.  We had amazing friends there, and ministry was flourishing, but I did not love Mexico City.

I felt guilty about that.  I prayed that God would help me love this place.  I was insanely jealous of other missionaries who claimed to LOVE were they lived and worked.  Somedays my only sanity was telling myself, “At least I’m not called to China.”  God knew I couldn’t take that!!  We didn’t love it, but we threw ourself heart and soul into Mexico City.  We gave 110% every day.  I still felt guilty about being so unhappy.

Then one day my Dad told me something that totally changed my thinking about this and gave me freedom from guilt.  He told me, “You can be completely in the center of the will of God and still be miserable.”  That got me thinking.  I’m sure Jonah hated being in the belly of the whale- but that’s right were God wanted him for those 3 days.  I’m sure Daniel was less than thrilled to spend the night in the lions’ den- but God sent him in there.  I know for a fact that Jesus dreaded going to the cross.  He sweat great drops of blood as he prayed in the garden the night of his betrayal.  He prayed, “Take this cup from me, Father” and all of humankind was a breath away from eternal damnation until he yielded, “But not my will, only yours, Father.”  He was right in the center of his Father’s will… and he dreaded it.  So I was not alone.

So the point is, our emotions are not a good indicator of reality.  Just because you are unhappy doesn’t mean you’ve missed God’s will or that you are being disobedient.  We can be totally happy and content and yet displeasing to God OR we can be miserable and be right were God wants us to be.  God’s will is completely independent of our emotions, both good and bad.  He does what he wants to do (he is Sovereign), and always does things for our ULTIMATE good.  But moment by moment he is less concerned about our happiness than he is about the end result of what he is doing for us and in us.  God is God.  He is not bound by contract to make me happy.  He is only bound to his own character which is GOODNESS.  Even when I hated being in Mexico City, I had the peace of knowing that I was right were God wanted me to be… even though I hated it.