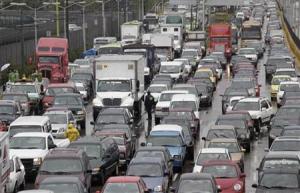 We saw God move a mountain.  We used to be missionaries in Mexico City.  There we had complicated and ever changing laws that restrict driving for everyone, but especially cars with foreign plates.  When this story took place, new laws were about to go into effect.  Basically we would not be able to leave the house until 11 am every day.  We would have two days a week when we couldn’t drive at all and one extra Saturday per month of no driving.  Each of our 2 cars were restricted on different days.  I feel like I need to lay down now just thinking about all the rules!

Imagine how difficult it would be when we host teams to find vehicles that would be able to drive on each day that we needed them.  How would we get our kids to school or conduct any business before 11 am?  We had been told that vehicles that were newer than 5 years would be able to receive a special verification that would nullify all but the special Saturday restriction.  Unfortunately our second car was 6 years old, we tried to get it verified, but it was never allowed.  Even more frustrating, when Josh tried to renew our verification on our newer vehicle he was told that the government wouldn’t have the stickers ready for another 10 days.  The entire city was basically homebound for 10 days.

With these concerns on my mind and a team coming in 2 weeks I felt stressed, to put in mildly.  In the meantime, I had a Spanish song running through my head that says, “If you have the faith of a mustard seed,  you can say to this mountain ‘move yourself’ and it will move.”  So I took the matter to the Lord.  I said, “Lord, for us this is a big mountain.   We can’t change the law that doesn’t allow us to drive, and without our vehicles we can’t live here!  Please move this mountain.”

Immediately I felt the Lord say to me, “In 10 days take both vehicles to the verification station and don’t say anything about the one being too old.  Go first thing in the morning.”  Now believe me, I have prayed many, many times and not heard God respond this clearly or this quickly.  I was surprised, but I told this to Josh and that is exactly what we did.

Ten days later, on the day when the verification stickers were finally supposed to be available, we prayed and set out with both vehicles to the verification station.  We arrived at 8am.  There was a long line at the station already and the workers were stressed because their computers weren’t up yet.  We waited for about 45 minutes.  The other drivers were getting impatient.  The workers were getting more and more agitated.  We waited patiently, praying.

Suddenly the computer system came on line!  The workers started rushing the cars through the paperwork and examination process.  Our turn.  We saw right on their computer screen that our old car was not going to be allowed a permit because some Mexican car already had our same license plate number, plus it was too old.  But it was like the workers didn’t even see the screen!  They walked out to our car and slapped a sticker on the back window without even flinching!  Josh opened up the back of the vehicle and passed out bottles of water to all the workers as a celebratory “thank you”.  We drove home praising the Lord for moving that mountain for us!!