I thought this quote was just so powerful that I wanted to share it on my blog.  Just think about this:

“Not called,” did you say? Put your ear down to the Bible, and hear Him bid you go and pull sinners out of the fire of sin. Put your ear down to the burdened, agonized heart of humanity, and listen to its pitiful wail for help. Go stand by the gates of hell, and hear the damned entreat you to go bid their brothers and sisters and servants and masters not to come there. And then look Christ in the face, whose mercy you have professed to obey, and tell Him whether you will join the march to publish His mercy to the world.   -William Booth

As we have traveled around raising our funds to be missionaries, I cannot tell you how many times I’ve heard a variation of this comment, “I totally admire the sacrifices you are making to do this, I know I could never do that myself.  Maybe if I had a Calling, but I don’t.”  I think the first part of the sentence is more truthful than the later part.  The real reason more people don’t take soul winning more seriously is that it’s uncomfortable and inconvenient.

May people who claim to be Jesus Followers are like the rich young man who asked Jesus, “I’ve followed all the commandments to the letter, so what ELSE must I do to follow you.”   Then Jesus disappointed him by saying, “Sell everything you have and give it to the poor.  Then come and follow me.”  The rich guy was sorely disappointed because he had a lot of nice things.

God will always push us to our limits to show us the idolatry in our lives.  He pushed Abraham to sacrifice his son Isaac (though he didn’t make him go through with it in the end) to test his fatherly love.  He pushed Joseph out of his family and into slavery, separating him from a doting, spoiling father.  He pushed Saul (Paul) to the ground outside of the city of Damascus, breaking his vicious pride.  He pushed Peter to the point of denying his relationship with Jesus, then brought him around again to “If you love me, then feed my Sheep”.

You want to follow Jesus?  Prepare to be uncomfortable.  But I assure you that any discomfort you feel in you walk with Jesus is nothing compared to the discomfort- no agony- being experienced by those lost souls in Hell.  Kind of puts it all in perspective doesn’t it?  Let Jesus push you to your limits and beyond.  You may be surprised at where you find yourself going once you acknowledge your Call. 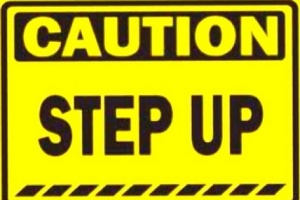