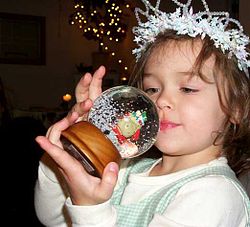 I handed my friend Marcela the pretty little package wrapped in simple Christmas paper.  Inside was a snow globe.  As she tipped the globe, the figurine of a snowman clad in a red scarf smiled out at her through a curtain of glittery snow.

“Oooooh, I love it!  Just LOVE IT!”  She squealed with delight.  I was glad she liked the Christmas present.  We stood beside my tall Christmas tree that she had been eyeing with pleasure all evening.  “You know, when I was a child my parents were pastors.  The Christian church used to be very conservative back then.”  She commented as she fingered an ornament on the tree.  “And we never, ever decorated for Christmas because we were always concerned about what people would say.”

I must have had a confused look on my face because she expounded further on her parents’ conservative views.  Marcela’s family never had a Christmas tree.  They never mentioned the Nativity story.  And they never gave each other presents.  Apparently here in Costa Rica many Christians still view Christmas as a Catholic or pagan holiday, depending on their own prejudices.  Many families that have converted from Catholicism to Protestantism have completely rejected anything that even appears in the Catholic tradition.

While my friend talked, I remember a missionary from several years ago telling me that she collected Nativity sets.  But she always had to put them away whenever a Costa Rican family came over to her house because the Nativity was considered part of the Catholic symbolism.  My own Nativity set was sitting on a side table in plain sight.

Marcela continued her story.  She said she would always go over to her friends’ houses and lovingly admire their trees and lights, but her parent’s wouldn’t budge in their decision not to decorate.  So when she got married, she decided, “I am an adult now.  I’m going to make my own decisions, and I don’t care what people think!  I love Christmas, and I’m going to decorate.”

She and her husband married in October.  Her first major purchase was to buy a Christmas tree!  The first year they decorated together, and it was a novelty for both of them.  The second year he said, “You’re going to put that up AGAIN?” and he lost interest in helping her decorate.

This is their third year of marriage.  They are currently sharing a very tiny apartment above the church with her in-laws who are also the pastors now.  When she decorated their tiny apartment with a little tree and lights around the window, her in-laws were less than thrilled.  “Hmm,” her father-in-law sniffed, “I feel like I’m living in a department store.”

So now I understood her great joy in receiving a pretty little ornament that she probably never would have bought for herself.  Their family still does not celebrate Christmas… no gifts, no traditions, no decorations.  But my friend is doing her best to keep up her Christmas cheer.