How is it that I live in a tropical country where the number one gardening tool is a large knife called a machete… and I don’t have one.  It’s like an American not owning a lawn mower (which I don’t have either.)  I am sitting on my patio, looking at the palm tree growing in the empty lot behind my house.  It’s branches are hanging over my back wall which is rimmed with razor wire to prevent thieves from climbing over the wall.  The razor wire cuts up the palm leaves as the wind blows them back and forth.  The lower few palm branches are dead and ugly.  I would lop them off if I had a machete.

I will have to wait for the gardener to come.  Our landlord sends over a gardener.  Since it’s the dry season, we don’t see him too often because plant growth slows during this season.  The gardener is a frail little old man.  His tools include a gas-powered weed whacker and a rusty machete.  He squats down at the edge of the garden and hacks away at the weeds and leggy branches of the plants.  Then he weed-whacks then entire yard within a millimeter of the dirt.  It’s a miracle that any of the grass survives.  We have large bald spots in the center of the yard and it’s not from the random soccer game that the yard hosts once in a while.  He’s a quiet little guy, but he’s vicious with the greenery. 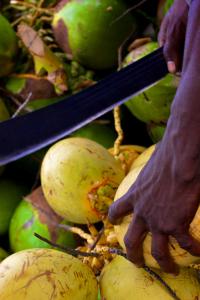 If I had a machete, I wouldn’t have to wait for the gardener to come and hack up my plants.  I could do the hacking selectively and precisely.  No massive slash and burn tactics would mar my garden.  Yep, I need a machete.  Plus I could always open a coconut any time I wanted to… not that I have a coconut palm handy or anything like that.  But one always wants to be prepared.

However, I AM the SUPER klutzy.  If anyone was going to cut a finger, or toe or limb with a machete, it would be me.  I am not nearly as concerned about my children getting hurt as I am about the possibility of hurting myself!  Though I am nearly 4x as old as my children, and according to basic probability calculations I should have 4x the experience as them- I am certain I have incurred WAAAAAY more injuries than they will every experience just because I am an accident waiting to happen.

So maybe I should be talking myself out of buying a machete.  Maybe I should just let the old gardener do the chopping and lopping.  Even though a machete is awefully handy down here, maybe I should stick to spades and garden clippers instead.  I don’t know if I will every really trust my skills in handling a giant blade used for all manner of whacking and chopping.  Yes, I think it’s best that I DON’T own a machete.