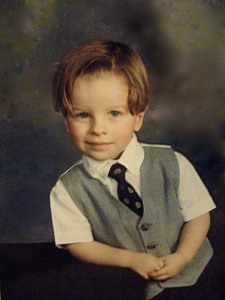 This boy is the child who made me a mother for the first time.

This boy is the one who wanted to be rocked to sleep… for hours… every night.

This boy is the child who loved Thomas the Tank Engine.

This boy used to stand at the screen door crying if I went into the garden without him.

This boy talked my ear off for the first 6 years of his life and must have spent all his words because now he’s pretty quiet.

This boy was my little companion, my buddy, until he converted to the Man Side of the family and started copying everything his Daddy did.

This boy was homeschooled through 4th grade and would still enjoy NOT going to school simply because it means he has to get up and put clothes on every day.  I’m worried about college.

This boy is spending his last year with us.  I am very conscience of the fact that he will be leaving the nest next spring.  I feel sure that he will launch into adult life nearly totally prepared, at least as prepared as any other 17 year old boy.  But he has a lot of “firsts” ahead of him still.

He can navigate through an airport and control his own passport and documents, but he has never worked a job.  He has a driver’s license in Minnesota, but we live in Costa Rica where it’s illegal for him to drive.  He can speak two languages, but he needs to learn to speak up for himself sometimes and not be so shy.  I’m pretty sure there will be girls who try to get his attention, but he doesn’t know all the games that girls can play with a boy’s heart.  He knows how to do his own laundry and wash his own dishes and clean his own bathroom, but he doesn’t do it voluntarily… I guess that’s normal.  At least he’s got good personal hygiene.

This boy is stepping over the threshold into manhood right before my very eyes.  I couldn’t be more proud of him and the depth of his Godly character.  I am excited for all the future holds for Taylor. 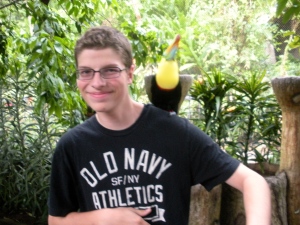 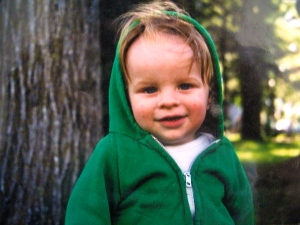 When I look at old pictures of my first born, I think of the first 5 years of his life.  When I found out that I was pregnant with a boy, I got a little scared.  I didn’t know much about boys.  We only had girls in my family.  So I started talking to other moms of boys and asked, “What’s it like to be the mother of a boy?”  Turns out, it’s great!  Taylor was my little buddy, spending all day every day tagging along with me.  He was my only child for 5 years.

Around age 3 he jumped ship and wanted to spend as much time with his Dad as possible.  One day I was standing in the kitchen making dinner while my husband was down in the basement working on the furnace.  Taylor bolted behind me carrying his little plastic tool box.  “What are you doing, Taylor?”  I asked as he headed towards the basement door.

In the most excited tone of voice he announced, “I’m gettin’ mad with my dad!”  And then I knew what was going on downstairs.  I heard big, manly-tool clunks and little, plastic tool tinks and I knew that Taylor was imitating Josh blow for blow with his little plastic hammer.  He was also imitating more than the motions, he was learning how to be a man.  How to be responsible.  How to be a provider.  How to try his hardest and do his best.  How to be self controlled.  How to be strong.  How to love God and his family too. 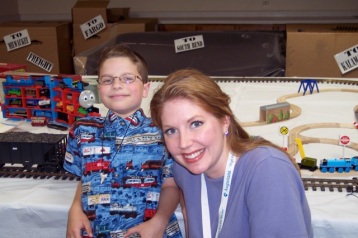 When Taylor was around Kindergarten age, my sister was working at a Senior Housing Facility.  In the evenings she taught ceramics classes.  One night a week, Taylor and I would go to ceramics with the old people.  They just adored him!  (I’ve always called Taylor an “Old Lady Magnet” because as a baby he would make flirty faces at the Grandmas in the grocery store.)  At ceramics class he would sit perched on a stool and would paint away on his projects while the old folks asked him questions and chatted with him.  One guy road a Segway around the campus.  Taylor was so impressed with that.  So one time the man let Taylor stand with him and they road down the hall together.  Taylor still talks about that!  When we moved away, the ceramics class all signed a special plate that they painted for him.  He still has that. 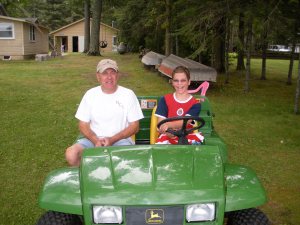 Taylor has always been fascinated by anything transportation related.  Since the age of 3 when he learned that you have to be 16 in order to drive a car, Taylor has been counting down the years.  He went through a long Thomas the Tank Engine phase (which I absolutely loved!).  He collected Hot Wheels cars and spent hours lining them up in rows like a parking lot.  He learned to drive “the gator,” which is like a golf cart for lawn work, at his Grandparents’ cabin.  He has begged to drive anything since he could talk!  And now the time has come.  He’s going home to Minnesota in a few weeks to take Drivers’ Ed and get his permit.  He’s finally going to drive… legally.

I’m really proud of Taylor.  I like the person he’s becoming.  I’m proud that he’s MY boy… OUR boy.  He’s been a wonderful kid and he’s turning into an amazing young man.  Everyone who knows him feels that he’s a uniquely sensitive kid with a kind heart and a mature thoughtfulness about him.  I have had so many of his teachers stop me in the hall at school to tell me how much they enjoy having Taylor in their class.  He makes an impression.  He’s a godly young man.

Happy 16th birthday Boy!  We love you and are so excited for the independence you are growing into.  The future looks wide open for you!  Spread your wings and fly! 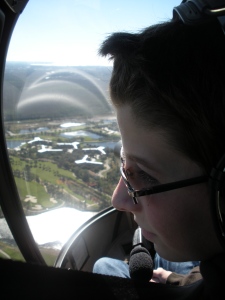 My kids find it astonishing and a little hard to believe that there were no remote controls when I was a child.  My sister and I WERE the remote controls.  We were stationed on the floor close to the television set.  When my Dad wanted to watch a different station all he had to do was bark an order and we hopped to it!  We TURNED the big ol’ dial until we found another station without static.  Then we had to stand up and adjust the bunny ear antenna until the picture was as clear as possible.  Sometimes my Dad would order us to adjust the vertical hold or the color dials.  He had high standards that technology just couldn’t satisfy at this point in time.  Years later we got a TV with a remote control.  I could finally sit on the couch and watch TV.  Watching TV would never be the same again.

Kids watching the microwave... not my kids or my picture.

I remember our first microwave oven.  It cost a small fortune and was the size of a Buick sitting on the kitchen counter.  We all huddled around the little window to watch a cup of water boil.  My mom turned the dial and it began to tick.  We thought we were probably all destined to get cancer from the dangerous waves emitting from the futuristic box, but we didn’t care.  We cheered and clapped at the miracle of boiling water in under 5 minutes!  Dinner would never be the same again.

I remember when a video store came to our street.  My dad thought the neighborhood was going to pot.  I didn’t know what a video store was, I thought he meant an arcade was being put in.  I thought it was cool to have an arcade right across the street from our elementary school.  I had no idea what a video was.  The family that owned the store had a daughter in my class.  She invited all the girls over to watch a movie on this huge, top-loading, Beta eating machine attached to the TV set.  We could rent a video player at the store.  Very soon after it open, my Dad was one of the first customers to plunk down a deposit on a rental machine.  That night we discovered the pleasure of watching a movie in our own house.  Entertainment would never be the same again.

My Grandpa was the only one in the family who owned a home video recorder.  It was reminescent of a Russian satellite.  He would give the machine to me and my sister, telling us to go make something creative.  We would dress up and lip sync to 80’s music to make our own music videos.  We spent hours giggling as we interviewed each other like Barbara Walters-wanna-bes.  Of course we had all the classic video camera tricks like recording ourselves in a mirror and sneaking up on people to record them when they were unaware.  The whole family still lined up and posed for pictures with the video camera.  It was like we couldn’t comprehend that we didn’t have to hold a smile anymore.  Taking pictures and documenting family history would never be the same again. 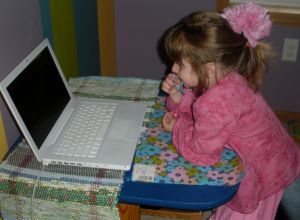 My daughter watching a movie on my laptop

My kids know very little about buying film or flash cubes, computers that can’t be carried around, phones attached to the wall, sending mail via the post office, pay phones, or life before credit cards and the Internet.  As far as my kids are concerned, I grew up on a different planet.  They just can’t comprehend life without technology.  They think I’m being an ogre when I ground them from technology.  It makes me wish the power would go out more often so we can light some candles and play board games as a family, just for fun.

Now I’m interested in your stories.  Tell me about what you DIDN’T have as a child.  Do you miss those days or are you happy with your smart phone?