This morning I sat in my Costa Rican rocking chair on my front patio with my Bible open on my lap and a coffee cup in my hand.  I looked up into the cloudless, brilliant blue sky then down into my rainy-season green yard.  Deep contentment swelled in my heart even as a distant car alarm broke the background of Sunday morning silence.  I thanked God for all He has done for me and for giving me this life I love.  I thought of our friends here in Costa Rica.  I once again thanked God for putting them in our life and giving them a faithful love for us.  It is a rich blessing to feel God’s love shining on you through another person.

Then my eyes drifted to the rescued Ficus tree in the center of my yard.  Salvaged from an infancy of neglect, he’s looking like a healthy, happy child a growing strong in a circle of sunshine.  I am happy that such a sad little tree could be revived.  A scripture verse floated into my consciousness.  “…He is like a tree planted by streams of water…”  I know that verse by heart, Psalm 1, yet I reach for my Bible to hear what the Lord is whispering to me.

“Blessed is the man who does not walk in the counsel of the wicked, or stand in the way of sinners, or sit in the seat of mockers.  But his delight is in the law of the Lord, and on his law he meditates day and night.  He is like a tree planted by streams of water which yields its fruit in season and whose leaf does not wither.  Whatever he does prospers.”  Psalm 1:1-3

The Lord spoke encouragement to my heart and told me that I am like the tree planted by streams of water.  I delight myself in the Lord.  I keep my thoughts on Him day and night- casting my burdens of worry and care on His ample shoulders.  I am free to grow tall.  In the right season, I will produce fruit.  I won’t grow weary and dry.  Whatever I do, the Lord will prosper because I am rooted in Him.  I push my thirsty roots deeper into His Word, sucking up the life I find in Him.  And I exhale deep, cleansing contentment.  I am at peace in the circle of His Sonlight. 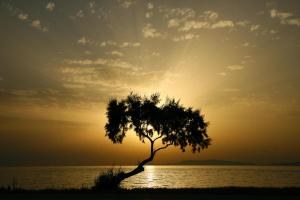 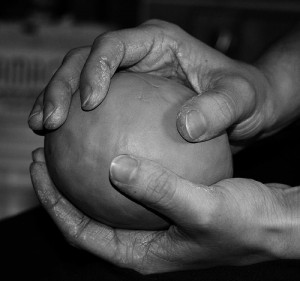 “The same sun which melts wax hardens clay.  And the same gospel which melts some persons to repentance hardens others in their sin.”  ~Spurgeon

Problems reveal what you’re made of.  When the pressure comes, do you crumble or turn into a diamond?  The same problem that causes one person to draw closer to God can cause another to shut God out of their lives forever.  The same crisis that causes one person to become aware of and appreciative of God can cause another to curse God and grow bitter and hard.

The Bible says that when God was preparing to deliver the Children of Israel from slavery in Egypt,  God had a plan to show his mighty hand to the polytheistic, idol worshiping nation.  He planned to use the man Moses and to use the apocalyptic powers of nature to reveal his mighty powers.  Every time Pharaoh would come close to letting the Hebrew slaves go, he would change his mind at the last minute, his heart getting harder and harder each time.  The Bible says “And God hardened Pharaoh’s heart” because he still had more lessons to teach the Hebrews and the Egyptians alike.  Is it fair for God to harden a man’s heart and then condemn him for it?

Yes, it is fair.  Because your reaction to pain is evidence of what you are made of.  Hurricanes of pain and suffering happen to both the good and the bad.  But only a certain kind of person comes through with resilience.  Your reaction to God will reflect what you are made of in your heart.  Will the pressure turn your life into a clump of dirt or a diamond?  Only going through pressure can reveal that to you.

My roommate from college lost a child when he was just over 1 years old.  As I read her emails from wherever I was in the world, I saw her growing stronger and stronger in her faith.  If you had asked me back in college whether I thought her faith could survive such a storm, I would have said No Way!  And yet, here she was maturing and growing right in front of my eyes and it was the pain and pressure that was promoting that kind of rapid growth.  The astonishingly high divorce rate among couples who have lost a child is evidence that this kind of pressure causes many to crumble.  But not my roommate, she was pressed into her true form through this tragedy.  She is a diamond.

It’s probably a silly question to ask you if you’ve heard the word “mentoring” before.  But it’s a less ridiculous question to ask if you really know what it means.  It seems like there are a lot of definitions floating around now days.  But it wasn’t always this way.

Back in our first year of marriage and our first year of full time ministry I was feeling pretty lost.  My Mom and Dad had recently moved to another state to pastor a church (this was in the days before the internet.)  In addition, I had very few girl friends in my life.  All of my college friends were getting married and moving on with their lives.  I felt alone.  After being lonely and wondering exactly HOW I should do this pastor’s wife thing, I decided that I needed some women friends in my life.  I know it sounds weird, but I didn’t even know how to make new friends outside of school!  So I decided to go to a Women’s Prayer Retreat at a camp grounds 3 hours from my house.  I knew no one else who was going.  I just decided to go by myself.

At the Prayer Retreat, one of the speakers talked about this new idea called “mentoring”.  I had never heard of it before, but it resonated with me.  I spent the weekend asking other women what they thought of this idea, is it compatible with ministry, how do you find a mentor?  And I prayed.  I actually prayed for 3 months that the Lord would lead me to a mentor.  I kept my eyes opened when I was at church, and I found a mentor.  I admired her ministry in the church.  I respected her family values.  I thought I would enjoy her company.  But I still didn’t know what a mentor was supposed to do exactly.  One day I went out on a limb and asked her if she would be my mentor.

She was just as bewildered by this word as I was.  But after praying about it, she decided to try it.  She laid some ground rules with me, which I thought was very wise.  She said, “No gossip, No talking bad about our spouses, and everything that we discuss is confidential.”  So over the course of the next few months we talked regularly.  We talked about ministry.  We talked about the things I was struggling with.  We talked about home making- I was learning how to sew and she was a Home Economics Teacher, so that was fun.  We talked about marriage and children.  I watched her.  I imitated her.  I modeled my thinking after her thoughts.  I grew a lot.

I was thankful that the Lord gave me someone mature and respectable like her to walk with me through my early growing phases.  I learned that not only can mentors be someone that you know personally, but they can be a person that you “know” by reading a book about their life or someone that you watch from a distance.  You don’t have to meet for coffee once a week to GLEAN from someone’s experience.  I wanted to tell you this story about a mentoring success, because tomorrow I’m going to talk about what happens when mentoring goes to the extreme.  Just so you don’t think I’m jaded, I wanted to preface tomorrow’s blog with a good experience.  So hopefully you’ll come back tomorrow.

I’ve probably said it a thousand times, “These kids have got to stop growing!”  You don’t realize how much your own kids have changed because you see them every day.  But you notice when other people’s kids are growing.  We went back to Minnesota for Christmas this year.  We haven’t been home in a year and a half.  Aside from the shock of the temperature difference between Costa Rica and Minnesota, I was totally shocked at how big all my nieces and nephews had grown in 18 months.  Everyone came to the airport to greet us.  When we walked through the security doors all these tall, gangly teenagers came running down the hall at us!

It reminded me of when I take my dog to the groomers.  I always tell them to cut Nacho’s hair very short because shih-tzus are long haired dogs.  It buys me time between visits to the “Peluqueria”.  Every time they bring out my freshly shorn pup I don’t recognize him.  But he seems really happy to see me, so this must be my dog.  I take him home and in a few days I again recognize my own dog.  The change is just so shocking at first!

Well it was the same with my nieces and nephews.  I didn’t recognize these kids.  But they seemed really happy to see me, so they must be my family.  In a few days it wasn’t so weird that most of them are taller than me now.  And I was once again recognizing my own family members.  The change was just so shocking at first.  I told them all to quit growing so I don’t have to go through this again when we come back next time.  I doubt they’ll listen to me.