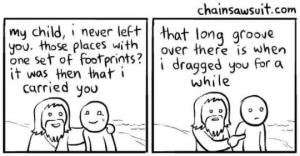 This is a funny comic that has been circulating on Facebook for a few days now and I admit, I snorted in laughter when I first read it.  Yeah, I get it.  Sometimes “Life’s a drag” (wah-wah-wah).  I’ve had times in my life when I’ve felt like God was dragging me along.  I dug in my heels, refused to budge, and God used circumstances to drag me forward in whatever He wanted for my life.

Hosea was commanded by God to marry the prostitute Gomer and to have children with her.  Their dysfunctional marriage became a tangible picture to the people of Israel of how they were being unfaithful to their covenant with God.  Like a prostitute, the people of God were lusting after other gods and throwing themselves at other lovers.

So Hosea the prophet warns Israel of God’s punishment of their rebellion with these words:

“She said, ‘I will go after my lovers, who give me my food and my water, my wool and my linen, my oil and my drink.’  Therefore I will block her path with thorn bushes.  I will wall her in so that she cannot find her way.  She will chase after her lovers but not catch them; she will look for them but not find them.  Then she will say, ‘I will go back to my husband as at first, for then I was better off than now.'”  Hosea 2:5-7.

God used a hedge of circumstances to drive unfaithful Israel back into his arms.

God also uses hedges for our protection.  In the book of Job, Satan complains that God has put a hedge around Job, his household and everything he owned so Satan couldn’t touch Job (Job 1:10).  So in order to prove Job’s dedication through trials, God removed the hedge and allowed Satan to take away comfort and health and all that God had blessed Job with.  Job withstood the trial and refused to curse God.  In this, we get another picture of how God uses hedges to protect us.

So it comes down to this.  You can’t fight God.  God does what He wants with our lives.  If you dig in your heels, He’ll just drag you along.  If you’re wandering away from Him, He’ll throw thorn bushes in your path to turn you around.  And when you find your pleasure in Him, He will shelter you with a hedge of protection.

God will have His way, no matter what.  He may throw you over his shoulder and carry you when you’re weak and tired, or He may drag you along until you stand on your own two feet and obediently follow His leading.  God is God and you are not.  God does what He wants in the way He wants to do it.  And no one can challenge Him.  He is the God of the Universe and He will have His way.