I know for a fact that children hear more clearly from God than adults do.  We had been trying to have a second child for around 3 years with no luck.  Taylor, our 4 year-old son, knew that we were praying for a baby.  He had his heart set on having a baby sister, and he wanted her to be named “Emmie”.  He wanted a baby sister so badly that he played with an imaginary sister named Emmie… though sometimes Emmie was also an imaginary cat.  But he was so certain that he would have a sister named Emmie that I would have to forewarn all his new Sunday School teachers that I was not pregnant, no matter how much Taylor insisted that his baby sister was going to use his old crib or car seat.

One day my sister and I were taking Taylor to the zoo.  Suddenly from the back seat of the car we heard Taylor’s little voice pipe up with excitement, “Oh NOW I know what Jesus wants!”  He announced.  We looked at each other and asked Taylor what does Jesus want.  “Jesus wants us to pray for my baby sister NOW!”  Fully believing him, we pulled the car over to the side of the road and right there in Como Park on Lexington Avenue we prayed for Taylor’s baby sister Emmie to come.  When we were done praying he announced confidently, “She’ll be her by my birthday.”  When his next birthday rolled around I was about to pop being nearly 9 months pregnant with our little girl.  Of course we named her Emma.

We remind our children that we prayed for them and that God heard our prayers.  We remind them of this story when they are fighting (haha)!  And we remind them when we are trying to make them feel special and loved.  God knew the desires of our hearts, in fact, God GAVE us those desires in the first place and then he delighted to fulfill them using the prayers and faith of our 4 year-old. 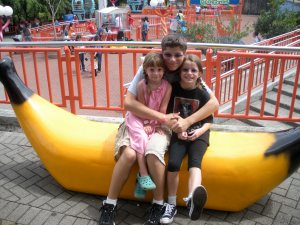 This is the tale of a wanna-be missionary and a sudden case of cold feet… or actually hot feet, in this story.  Back in 2004 we took our first family missions trip to Mexico.  It was awful.  We had just resigned our position as youth pastors to become missionaries, and we were preparing to travel to Springfield, Missouri for 5 weeks of School of Missions where we would be living in college dorms with our 2 children.

As if a 5 week stay in college dorms with a family of 4 wasn’t enough of a packing challenge, we decided to tack on a week in Mexico for a family missions trip, sort of as an introduction to missions for our children.  This was the dumbest idea we’ve ever had.

First of all, it was about as hot as Hades that summer and we drove the whole way from Minnesota to Mexico.  Of course the air conditioning broke on the way down.  Then my 2-year old daughter cried day and night for a week solid because she was so hot.  I thanked God for not calling us to the Philippines.

Second of all, the dynamics of the trip were really off kilter for us. We were used to being in charge.  But this was a group trip organized by someone else in our church.  No one was very clear about our role on that trip- least of all us.

Thirdly, we didn’t know the independent missionary that we were working with.  When it was all said and done we were less than impressed with this wacko.  The whole orphanage/ministry compound had a Branch Davidian sort of feel.  The kids were strangely aggressive and conditioned to leech off of teams that came to work there every summer.  I felt used.

They used the teams to improve their property and boost their income, but they didn’t take very good care of their teams.  Part of the compound included housing for teams, two cinder block bunk houses.  These houses were incomplete. There were no doors, no screens nor glass in the windows, just cinderblock walls and a tin roof.  I felt really exposed- especially since I could see that there was no closing gate at the front of the compound.  Anyone could just walk right in off the street!  My husband and son were sleeping in the boys’ bunk house and my 2-year-old daughter and I were sleeping in the girls’ bunk house.  I thought, “what did we get ourselves into?”  I felt unprotected and nervous.  I learned to sleep with one eye opened.

But what really pushed me to my breaking point were the bugs.  I had never seen cockroaches that big before.  They were everywhere.  I… HATE… COCKROACHES.  There was no way I was going to be able to sleep without fearing that cockroaches would crawl on me in the night.  I pushed our two bunk beds away from the walls in case a cockroach came up the wall.  Every night I laid on top of my sleeping bag (it was about a million degrees inside the bunk house) and I would pray, “God, please put your angels around us while we sleep so no one comes in the front gate to kidnap anyone.  And while the angels are standing guard, please have them kill any cockroaches they see so they don’t get on me.”  And I kid you not, EVERY morning I would wake up to see a ring of dead cockroaches around my bed!!  I would sweep up a pile of them every morning.  Then I would pray again the next night.

I think God understood that if I had a bad cockroach experience this early on in the game that I might throw in the towel and move back home to Minnesota where the bugs are smaller and stay mostly outside.  I also took the dead roaches as a sign that God was listening to ALL of my prayers.  I couldn’t physically see how he kept us safe from bad guys at the gate, but I could see the evidence of his protection around me while I slept.  So I knew that God was listening to my prayers.  My level of trust in God’s care for me was hugely boosted on that miserable missions trip.