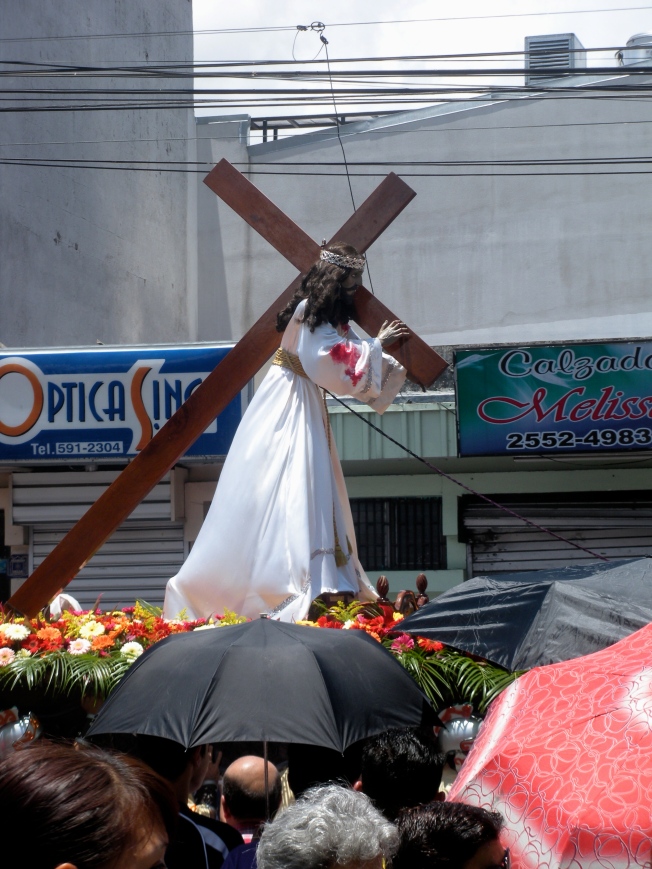 We went to Cartago to watch the Catholic processional on Good Friday. The Cartago presentation is unique in Costa Rica because they use live actors for most of the characters they depict. They use effigies of Jesus, the two thieves and the Virgin Mary only. They use one effigy for when Jesus carries the cross and a different one when he’s crucified between the two thieves. It’s quite elaborate. And the bishop gave a good salvation message at the scene of the crucifixion.

This week is Holy Week, the week before Easter.  We live in a Catholic country here in Costa Rica.  That means that this holiday is most certainly “owned” by the Catholic traditions.  On Friday a group of us intend to go to Cartago to view the dramatic processional of the Catholic church, take pictures, and ponder the differences between the Catholic celebration of Holy Week and the nearly non-mention of it by the Protestant churches here.

Effigy of Jesus carrying his cross

So in preparation for our excursion I’ve been studying up on the Catholic Stations of the Cross (which is what the parade will depict).  There are 14 traditional stations but only 8 of them have any foundation in the Biblical account of the Passion of Christ.  The others find their origin in legends, local artifacts and human traditions that have grown up around the Crucifixion story.  Wikipedia says “The object of the Stations is to help the faithful to make a spiritual pilgrimage of prayer, through meditation upon the chief scenes of Christ’s sufferings and death.”  Sounds good to me so far.  Especially considering that even most modern believers rarely read their Bibles and centuries of believers had no Bible of their own- the visual story is good.

But here’s the kicker, “In the Catholic tradition, the meditation is often performed in a spirit of reparation for the sufferings and insults that Jesus endured during His passion.”  And “Pope Pius XI called the Acts of Reparation to Jesus Christ a duty for Catholics and referred to them as ‘some sort of compensation to be rendered for the injury’ ” of the sufferings of Jesus.  Let that just sink in for a minute.  Can a human ever pay back the Son of God?  Ridiculous!  I’d like to add that Jesus never even asked for compensation from us, He never even wanted us to pay Him back.  That is the whole idea behind the Son of God paying for our sins with His life- we can’t ever pay for our sins.  He offers forgiveness from sins as a free gift- it can’t be earned or deserved.

To say that Jesus wants or needs us to compensate him for even one injury that he received on that bitter sweet day is to completely cheapen His entire sacrifice and elevate ourselves to the position of benefactor instead of acknowledging what we truly are- helplessly lost, unashamedly rebellious, irreparably broken, unworthy of notice, wallowing in our own filth, naturally unfaithful, prone to wander, never good enough.  We devalue Christ’s sacrifice when we try to pay Him back.

Think of it like this.  Suppose you bought a really great birthday present for your wife, something that she had been needing and wanting ever since you first met her.  You knew this was going to be the gift to top all gifts.  And when she opened it instead of the wild expressions of exuberance and joy- the thanks with deep gratitude that you anticipate- she got out her check book and said, “Honey, that must have cost you a lot, what do I owe you?”  You would be so hurt and offended that she didn’t realize that it was a GIFT, a free gift, not given with the intention of ever being paid back.  You just gave the gift because you LOVED her, not because you wanted or needed to be paid back!  Jesus’s sacrifice on the cross is just like that- He gave himself to us out of His Love for us and never wanted or asked for us to try to pay Him back.  He just wants us to accept the gift (of forgiveness of sin), be really excited and happy about it, and to love him in return.  It’s just that simple.

So on Good Friday when I watch Saint Veronica wipe the mud from the face of Jesus with her veil and receive the “true icon” of his image burned into the fabric I will be thinking of the purity and simplicity of the greatest gift ever given.  And I will humbly and joyfully thank my Father in Heaven for giving me exactly the thing that I needed and wanted- the perfect GIFT- His only Son.  I love Him because He loved me first.