Today (April 16th- this is posting later) is the anniversary of the death of a dear friend of mine.  She was one of the first victims of Swine Flu in Mexico back in 2009.

Nely and her family.

That was a really rough year for me.  We had just come home from our first term in Mexico with a sick baby and I myself was going through cancer treatment.  At the same time, we were traveling around raising our funds for our next 4 year term overseas.  One day between my surgery and my radiation treatment, I was at home with Lucy when I received a call from my husband who was out of town.  He said he had received a call from Mexico from our friends telling us that Nely had died unexpectedly that morning.  I felt like someone punched me in the stomach.

I remember falling back against the wall and trembling all over.  How?  What happened?  All the details were sketchy.  We called several friends to try to piece together the details.  We called the airlines and booked tickets for that afternoon.

Our two oldest children were in school and would not be able to accompany us on the trip since their passports had just expired.  That was terribly hard to leave them behind, but we made the arrangements for them to stay with family and called the school to break the news to them over the phone since we would be leaving for the airport within the hour.  It was so hard not to be with them when they cried. 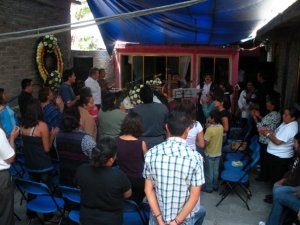 The service in front of her parents' house.

There is no embalming in Mexico.  Bodies are buried within 24 hours of death.  Often times, memorial services are held in the home with the rented casket and the body right there in the home.  Nely was a well loved pastor’s wife.  People came from all over the city to attend one of the 4 or 5 services that were held in her parents’ house.

The thing that I remember the most is looking into the faces of her three children and wondering Why.  Her youngest son Abel, stands out in my memory.  His face brightened to a wide smile when he saw us then immediately crumbled into tears.  I scooped him up in my arms and just hugged him without saying anything.  What could I say?  I had too many questions unanswered in my heart.

Nely was the kind of friend that every missionary needs.  I feel like God gave her an instinct to understand foreigners.  She left school when she was pre-adolescent and was married by age 15.  Nothing in her education could have prepared her to understand me.  She had never lived outside of Mexico City, even visiting relatives in the country side stressed her out.  She had never even visited many of the famous tourist sites in Mexico City!  So what could have prepared her to understand someone coming from another culture and country, speaking a strange language?  Only God could have given her the understanding and compassion to befriend a foreigner.  Only God could have given me a friend like Nely.

I lack the words in English OR in Spanish to describe the indelible mark that Nely left on my heart… on my life.  And I’m not the only one.  Everyone who knew her loved her and misses her tremendously.  A mom, a wife, a sister, a daughter, a friend.  She was so very ordinary by the world’s standards, but so very EXTRAORDINARY in all the ordinary things she did day in and day out.  She left her mark and in some small way the world is a better place for having known Nely.  And Heaven is all the more extraordinary because someday I’ll see her again up there.